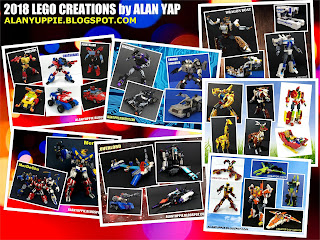 Woah... what a year! I think year 2018 is my most productive yet so far, when it comes to total number of LEGO Transformers I managed to churn out. Let me chronicle my 2018 LEGO adventures in groups rather than chronologically... 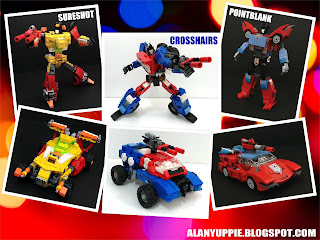 In G1 Transformers, Targetmasters are robots paired with aliens-that-looked-like-humans , where the latter turned into weapons for the robot to use . However, I skipped implementing the Targetmaster feature for my 3 LEGO TF here. Instead each robot were given a generic rifle each.

Sureshot and Crosshairs were about 90% completed before 2018 actually. Pointblank is my favorite from the trio,coz he has one of my favorite futuristic land vehicle mode from all G1 Transformers. (My favorite jet mode is Misfire, made waaay back). 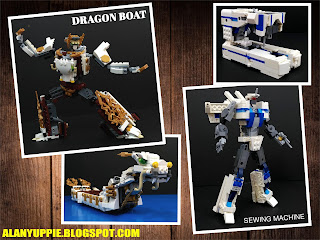 On the very first day of 2018, I made a prototype of a pretty ancient Transformers using LEGO. Few days later.. I was invited to participate in a Chinese New Year themed LEGO Exhibition at a local mall, featuring scenes and diorama of traditional Chinese towns and villages.  I took the challenge, and this Dragon Boat  Transformer is born 2 weeks later! (official photo gallery here). Then, I was itching to open a LEGO set to play around actually (and harvest the parts for my own creation). The timing is just right to unbox this set below to help finish my Dragon Boat: 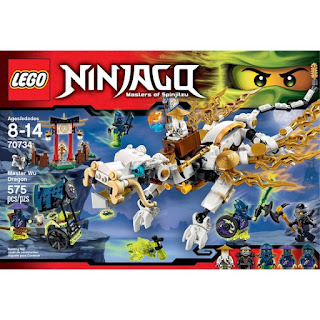 And as for Stitchmaster (Photo Gallery here) , the sewing machine Transformer... it's a June challenge I accepted in a FB LEGO TF group to build Transformers that turned into home appliances. I actually spent the first few weeks of June 2018 attempting an oven but failed. Finally I was able to get my groove on and Stitchmaster was completed within the last 5 days of June. 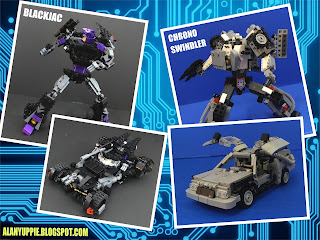 Both the Transformers above are outcomes from the challenges in a LEGO TF Discord group where I am a member of. For more photos...
\ 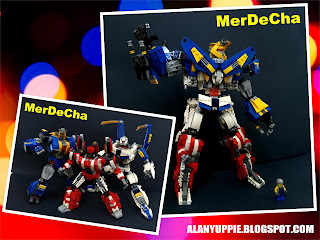 April 2018 is the Month of Pacific Rim:Uprising movie! So I hopped on the bandwagon and got my hands "dirty" and ended up with not just one Jaeger, but three! These were my contributions to a challenge for an FB group for LEGO Mechas.

I love to be surprised as well as surprise people. Instead of just building 3 independent Jaegers, I  made them combine into a super Jaeger! For more photos and to find out why he's named MerDeCha, click on the link below: 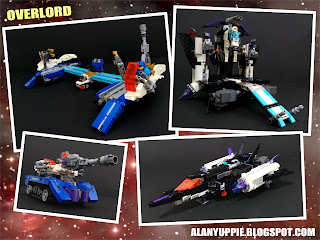 I love G1 Transformers that turned into base mode and Overlord ranks pretty high on my list as favorites. My project LEGO Overlord started months before year 2018 and was 90% completed in the beginning of 2018. Then it suffered from "development hell" for the most of this year. I'm not sure why I put it on hold...maybe it's the many "sudden" projects I took up and inspired to build the whole year through.

Finally I completed Overlord by September this year. The link below will show you more photos of the 2 major components that merge to become Overlord:


Now this project suffers from "publishing hell" !  I can't seem to find time this year to snap photos of his long awaited robot and base mode ! However.. I shall make it a point to put this to a closure by end of January 2019. 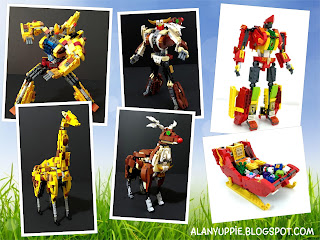 The Giraffe Transformer is , once again..a FB group challenge to build a Beast Wars character. Actually I'm not a fan of Beast Wars Series , so usually won't be building anything related to it. However... I gave this challenge a try and the rest is history! (More photos of my Giraffe TF here).

Not long after my Giraffe TF was completed, I am ... once again .. invited to join an Xmas themed LEGO Exhibition at a local mall. (the 7th largest mall in the world!). The idea for a  Reindeer TF* immediately comes to mind. (Click here for more photos) , as the techniques I learned from building a Giraffe earlier can be applied here. They both share 50% of the transformation sequence.


With some time to spare , I started a new project to complement the Reindeer ,despite me starting to feel unwell (down with a real bad cold that lasted for one whole month).... a transforming Santa Sleigh.  The sleigh TF was done when I was at my weakest and whisked off to the exhibition in sleigh mode, naturally. After the exhibition ended around mid-December.. I took it home and enhance it further (photos of my Sleighbot here).


*Actually it's not a necessity for me to build a Transformer in this exhibition, just something Xmas-sy would suffice, but I treat this as a challenge to make it transform. That's my style and something expected from me :) 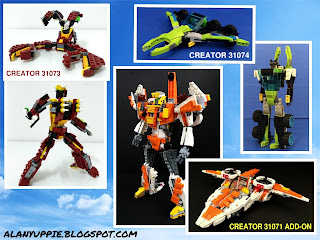 Each year, I look forward to new LEGO sets, especially Creator sets for me to rebuild into LEGO Transformers. This year (2018) offered me 2 of such sets. Click below to view the instructions of you're interested  to build one or two of your own :)


I joined LEGO Ideas Challenges where participants must build an add-on to any 2018 Creator sets at the very last minute!*  Sadly, I didn't win. But I really liked what I've achieved in 2 days before the competition ended, while still sick!  I have chosen the cheapest LEGO Creator set (31071 Drone) and built a sleek jet around it that even transform into an articulated mecha. Click here for more photos of this beauty!

*I discovered this competition on early November I think, but was tied up with upcoming Xmas Exhibition to do anything about it.


Besides spending time building and publishing new LEGO creations this year... I also revisited some of my past works and published videos about them. So please click and subscribe my youtube channel below! Your support really meant a lot to me! Thanks and have a great and productive 2019 ahead!