Do visit Part 1 if you have not already.  In this part 2, let me start by showing the transformation to robot mode from train mode.

Read more »
Posted by Alanyuppie at 9:05 AM No comments: 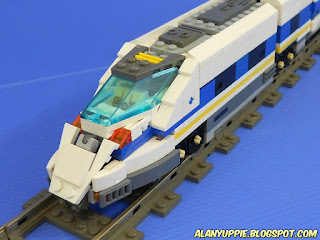 Railrazor (not related to this guy) is a  twin brother to Astrotrain. It was known that both of them signed up for Shockwave's triple changer experiment to enhance their abilities in battle.  However, sensing his benevolent spark slowly eroded by this experiment, he escaped Shockwave's lab but failed to save Astrotrain from the same fate , as his escape was quickly discovered by Shockwave. He lived as a fugitive ever since  in the depths of Cybertron (and sometimes flew above radar detection as a space shuttle (with stealth mode activated).