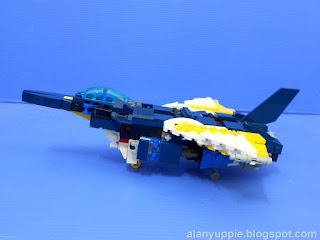 Hellbat turns into a Dassault Rafale fighter jet and he is paired with Komoribreast, his bat-like minion.

Like most of Breastforce  MOC I built, Hellbat too was almost done 2 months ago. But I was not satisfied with the outlook of the jet mode. One of the biggest (and final one to tackle) challenge is the implementation of the landing gears. As you can see from below, the back landing gears are slightly shorter than the front, causing the jet to be pointing upwards at a bigger angle. 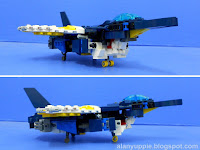 LEGO "pulley" parts were used for retractable back landing gears. 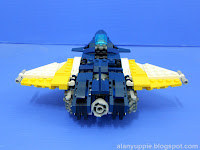 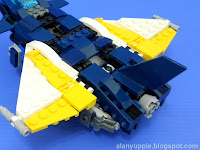 Initially the middle tailfin was white, but such LEGO tailfin has a wide base (2x3 stud footprint)  so the whiteness of this base doesn't look good on the dark blue jet body. Finally I decided to use a dark blue tailfin instead. 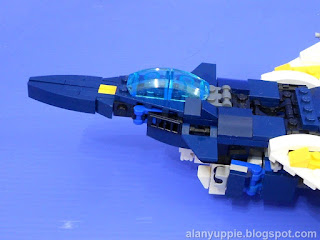 The design of the foldable small fins above had gone through various iterations from rounded slopes to wedge plates combined with c-clips / mixel balljoints, but these designs failed my structural test (they popped off easily mid-transformation). 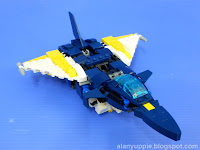 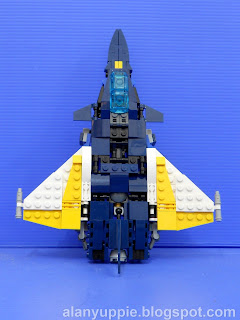 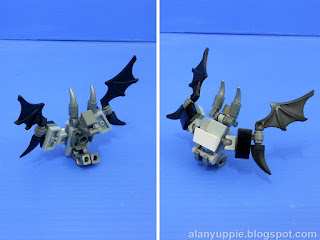 My eureka moment came when I built Komoribreast above. I was literally at a loss back then thinking how can I tackle this tiny MOC. After fiddling around with my Star Wars minifigures I noticed one SW droid body which looks like a bat head. So there. =) 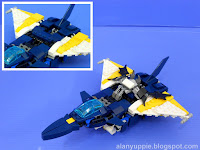 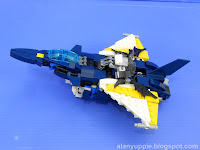 There is a reason why the surface of the jet mode must be partially studded rather than tiled smoothly. This allows the Komoribreast to be pegged onto it for a piggyback ride.

And the reason why I used rounded 2x2 plate to design Komoribreast's chest rather than square 2x2 plate is that the former offers light clutch power when pegged onto the jet body.  The latter , (square plate) proved to have excessive clutch power and it will be hard to detach from the jet without breaking the jet design. 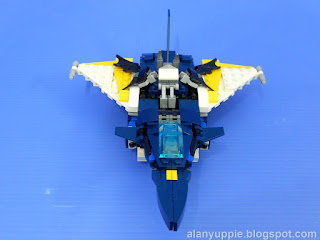 Guyhawk is one of the member of Breastforce Team. Both of them will become arms for the combiner super robot Liokaiser. 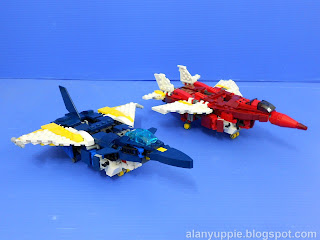 At the beginning of project Liokaiser , I planned to have these 2 jets be designed similarly except for the tail fins ,wings and color scheme. That would've saved me a lot of time but less challenging. (I thrive on challenges ).,, 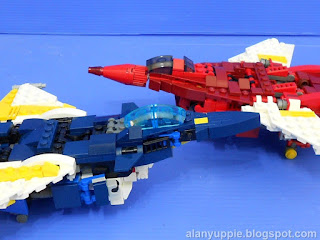 ... but scarcity of dark blue parts forced me to explore alternative builds especially for the nosecone (rounded for Guyhawk and sloped for Hellbat). While I'm at it... I guess applying a new transformation scheme is imminent. 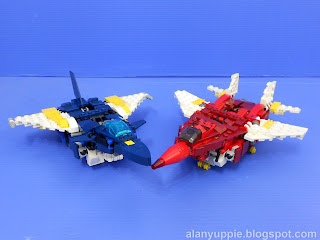 The wings for this type of jet are pretty huge , so I decided to distribute some of the wing mass to robot legs. 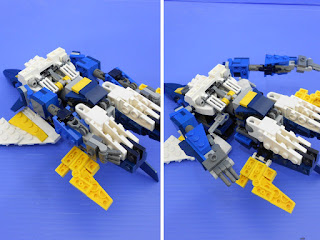 The legs are unfolded out ,taking along the yellow wing mass to bulk them up.

Now standing upright, the remaining wings are folded to the back, and the nosecone are split into 2 halves.

The sunken pair of grills on the chest can be folded out and held in place by the rotating rods underneath them.  This is to bulk up the robot chest in relative to the thick pelvis or else he will look anorexic especially from the side view/profile (think Steve Rogers/Captain America before injected with super serum).